As a site of reading and of its various representations, rural China has its own contexts and aspects. Nevertheless—or perhaps: because of it—the rural was of great significance for various reading-related campaigns and political movements of the Maoist state. In the first paper of the fifth session, Dr. Emily Graf focuses on “barefoot doctors” in the countryside in relation to reading. By investigating their double roles as both the subject of reading acts and the depicted objects in the representations of reading, Graf shows how barefoot doctors engaged in world-making practices, and asserted their place in a newly mapped world of revolutionary health. The second speaker, Dr. Sisi Dong (lecturer at Minnan Normal University), discusses the development of the Campaign to Study Mao Zedong Thought and His Works (学习毛泽东思想及其著作的运动) in southwestern China's rural societies. Focusing on a small village in Fujian province, Dong analyses the concrete reading situations, related difficulties and corresponding methods to deal with them, as well as the historical impact of the campaign at large. The discussant this week is Damian Mandzunowski, a core member of the READCHINA project. 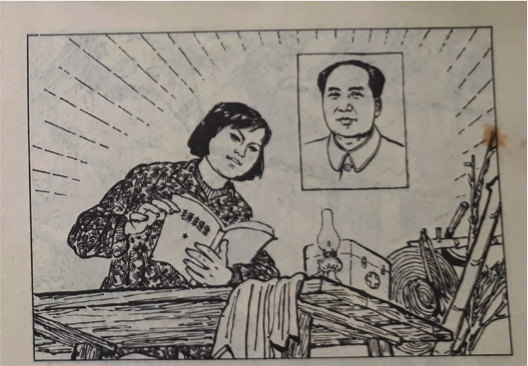 Self-Teaching and Self-Affirmation: Reading Barefoot Doctors and Practices of Worldmaking in the PRC

The term “barefoot doctor” (chijiao yisheng 赤脚医生) gained currency in 1968 during the Cultural Revolution, after Mao Zedong’s Directive had insisted that medical work needed to focus on the countryside. Doctors from urban areas were increasingly “sent down” to the countryside to train individuals in basic hygiene and primary medical care, offering classes for part-time health workers, so-called “barefoot doctors”. The image of the barefoot doctor became key in visualizing the revolution of health care in the PRC. This paper investigates the imagined reading practices of barefoot doctors. Three questions lead me through this investigation, starting from a very fundamental question: Did barefoot doctors read? If so, what did they read? Manuals, textbooks and medical journals for the implied barefoot doctor as reader give insights into the making of a new kind of (medical) knowledge. Barefoot doctors were presented as autodidacts, largely self-taught through independent study of “little red (medical) books”, illustrated manuals, political texts, but above all through learning-by-doing in practicing medicine. Collective reading in groups and oral transmission broke with established knowledge transmissions based on medical texts handed down from generation to generation within families or during apprenticeships. The young, low-literate, female barefoot doctor appeared as a new reader and new actor in depictions of revolutionary medicine. Taking a further step into the visual history of barefoot doctors, I inquire how barefoot doctors were depicted as reading in texts and images that aimed for a larger readership beyond the medical field. Depicted “reading acts” by the protagonists of three comic books published in 1970, 1971 and 1976 by the Shanghai People’s Publishing House manifest the importance of such acts to communicate the equal importance of political education and medical education. They, however, also reveal the visual contradictions that arise from arguing for learning-by-doing instead of reading in medical education through the means of visualizing reading barefoot doctors. And, surprisingly, they return to the private and secret reading act as the ultimate way to gain a ‘correct’ political outlook and Weltanschauung. By investigating what barefoot doctors read or were meant to read, and how they are depicted reading, this paper shows how barefoot doctors engage in worldmaking practices, self-constituting and self-affirming their place in a newly mapped world of revolutionary health.

My research focuses on the Learning Chairman Mao’s Works Movement in the rural society. Although the movement has gained much attention from contemporary researchers, most of them have relied on public archives, which means that they mainly analyzed the movements through significant changes in the political system. However, the practices of the mass in local societies are missing. Thanks to the grassroots resources that contain local historical documents from the “collective era”, in recent years, we are able to look at everyday practices in local societies. My main resources in the present research include local archival documents about the Learning Chairman Mao’s Works Movement in the collective era in S village, a village under the administration of the Yongtai County, which I discovered in eastern Fujian since 2016 during my fieldworks. I will structure my talk in four parts. The first part is about the stages of the Learning Chairman Mao’s Works Movement. Secondly, I will talk about difficulties in learning Chairman Mao’s works in rural societies. And then the third part is about the methods for solving the above problems. Finally, I will discuss the influences brought by this movement.